Well, I am sitting in bed trying to find the correct words to describe what my day was like yesterday. And whilst I am busy procrastinating, the shallow vibrations of Hyena calls eco through the bush.
Ahh home is the best place to be.

In this present time it is my birthday in South-Africa and I am a solid 25 years of age and I literally don't know where the time has gone.
Yesterday after getting everything done for the arrival of the next group of Veterinary students, I decided in the spur of the moment to accompany my husband and fellow clients to a reserve bordering Kruger National Park. This place holds a very dear place in our hearts and I was very excited to see this beautiful place again.
The wilderness is unsurpassed. everything is left untouched and extremely wild. Lions, Elephants, Hyenas all breaking through the fence and traveling between Kruger National Park and all of these bordering reserves. That is why the aura of the place screams wilderness like you have never experienced before.

On our arrival we immediately started looking for bait, just in case we needed a plan B for the Hyena hunt.
As daylight simmers down we needed to get a move on with the bait and luckily they shot a Dyker and the nerves where a little less tense.
Hyena hunting is extremely difficult as they are smart creatures. The reason for hunting the Hyena is quite simple, over population and over destruction of wildlife numbers on this reserve.

As dusk settles in they Hyenas did not fail to let us know that they where active, calling one and other from one end of the reserve to the other. The noise piercing through your veins!
We settled in and got set up in an old salt shed, where they would salt the skins before sending them to the taxidermy. Nevertheless that the lion pride had a keen sense of breaking and entering the salt shed to get to the skins. So we had to keep an extra eye out for them as well.
We sat in the shed for about four hours before hearing complete chaos! I t sounded a like a mad fading frenzy, the Hyenas made a kill on the other side of the river bed not too far from us and we decided to drive there. In the hopes of getting onto their trail, in the pitch black darkness of the night.

As we approached the war zone we stopped and listened to the helluva ruckus that they made, and I tell you it was absolutely breathtaking to be in the midst of chaos with nothing but pure and raw nature.

My husband took the two hunters and tracker with him as they pursued them on foot. Matt and I stayed at the vehicle and kept an eye out for any other dangers. We sat in completer darkness with only the stars to brighten up our paths, how beautiful this sight was. Miles and miles of breathtaking starlight

We sat for a while staring into the thicket of the brush until we could not see them anymore, only glimpses here and there of his green light flash light until suddenly a shot was fired, immediately knowing it was a clean miss. It wasn't until then that we realised that this was going to be a long night. Until we herd the cracking and breaking of branches and the noise came straight for us. Grabbing the torch, not hesitating for one second that this  is a Hyena  coming to size us up and as soon as we shone the light on him he took of behind us.
Not long after that we the rest of the hunting party returned with a freshly caught nyla bull that the Hyenas devoured! The perfect piece of bait, exactly what we needed to get the upper hand.

We dragged the carcass behind the truck to an open field and tied that what was left to a tree, when the ruckus of the Hyenas feeding started again. Immediately following the noise again, but this time it was not as easy. They where on to them and just kept on running away. Following their defeat the hunters retreated, or not completely.. Taking the road to the open field again we could see that the Hyenas too the bait and followed the scent, like the expert scavengers they are. Lighting the spotlight into the dense brush we could see a few pair of yellow reflected eyes.

It was only a few seconds until another shot was fired and it was a straight hit.
Very delighted with the trophy at 12:00 in the morning, we could load up and head back home.
The amount of Hyena on this property is terrifying. There where two packs which at least had thirty animals each. 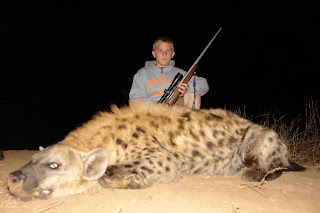 We headed home wards around 01:00 in the morning. Encountering a rough bull hippo on the main road next to some alfalfa fields. Overshadowed in puncture wounds from older bulls, trying to finds his place in the animal kingdoms hierarchy. He will stay on the bottom of the hierarchy until he matures and grows into an mature, adult hippopotamus bull that can defend his territory no questions asked. But for now he needs to keep a low profile and out of mature bull's territories.

What an eventful night.
Take Care

Posted by Travel African Borders at 06:53