Professional Hunter Dies After Elephant Falls on Him.

We received heart breaking news on saturday.
A dear friend in the Professional Big Game hunter industry lost his life to an elephant who fell on him on friday 19 May 2017.
Theunis Botha, 51, lost his life on friday afternoon during a hunt in Gwai, Zimbabwe.
When a member of his group fired at a charging elephant cow.
It is said that the group of hunters had gone for a walk on friday afternoon when they suddenly came across a breeding herd of elephants.
Three elephant cows stormed at the hunters and Botha shot at them. A forth cow stormed them from the side and one of the hunters shot her after she'd lifted Botha with her trunk.. The shot was fatal and just as the cow collapsed, she fell on the Professional Hunter.
He was a well known and respected hunter in Zimbabwe.

He was a highly regarded houndsman and he frequently led lion and leopard hunting safaris with his extremely well trained  pack of dogs. He was a specialist at hunting leopards with his hounds.  He pioneered traditional European style ''Monteria hunts'' here in Southern-Africa.
Monteria hunts are where  large packs of dogs are used to drive deer and boar towards hunters and then open fire on them.

His wife Carika will reportedly travel to Zimbabwe today to identify her husbands body and to bring it back to South-Africa.

Theunis Botha was also a good friend of Scott Van Zyl who was killed by crocodiles in Zimbabwe last month. Rumors are that he was murdered by thieves and the his body was fed to the crocodiles. Van Zyl, 44, was on a hunt at the Chikwaraka camp in Zimbabwe, when he disappeared on April 7th.
His backpack was found on the banks of the Limpopo river and two crocodiles where shot during the extensive search.
DNA samples where taken from the crocodile's stomach contents and tests where done. And it matched the DNA of Van Zyl.
Part of a boot, similar to that which Van Zyl was wearing when he disappeared  was found in the stomach of a third crocodile.

What a sad and tragic way to loose a loved one.
Our heart felt condolences and prayers go out to each of these families.
We pray that our dear Lord will always keep our families safe. 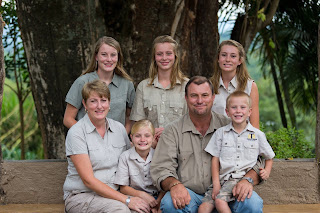 Theunis Botha is survived by his wife Carika and their five children. 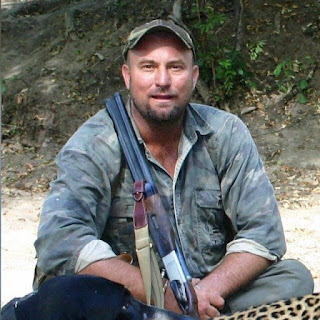 Posted by Travel African Borders at 07:40