It still saddens me to write this.
My husband's brother Benjamin Osmers passed away last year on a wednesday afternoon September 28th 2016 in a tragic helicopter accident.
The proceedings of that  faithful day still sends chills through my spine.
Charl's family owns a helicopter business which his father started and so everybody in the family are well rounded pilots.
Especially his brother, whom in a very short amount of time became very renowed.
His workmanship and professionalism where unmatched!
He was born to be a pilot!
He did an astounding amount of work up in northern Mozambique, counteracting the highly fought battle that we know as poaching.
Nearly half of Mozambique's elephant population has been killed only for their ivory in the past five years. A dramatic 48% decline in elephant numbers, from just over 20 000 to an estimated 10 300.
And he was there on the front line.
With the poachers always armed and ready for fire this was not a job for the faint hearted.
He was a brave soul and contributed immensely towards conservation, and he is missed dearly everyday.

On the faithful day of that wednesday on September 28th 2016, the conducted the finale phase of a game count on a farm not to far from here.
Game counts are conducted each year by most farms to get an estimate of the wildlife numbers.
This information assist with management plans, as each farm has a certain carrying capacity for wildlife which is best not to over take. To keep a healthy balance and to take care of your property.
This game count lasted for about three days.
The game count was finalized and he was ready to head home to his beautiful family, his wife Susan, eldest Elih Benjamin and youngest son Jordan Jacob. His family was everything to him.

He and the fellow busy commenting his commercial pilot licensing hours Gerdus Korb took off.
It was about 5mins after take off were they heard a loud bang from the engine and it was only a few faithful second when they hit the ground in full flight.
The helicopter immediately caught fire and in a few minutes the helicopter was incinerated.
By some miracle Gerdus could phone Charl's father. Charl and Roux (a fellow family friend) flew over to the accident scene as fast as they could and Charl's father, mother and Susan drove to the hospital.
Gerdus managed to escape the wreckage but Benjamin's post mortem declared he was dead on impact.

His legacy will life on forever.
He was a father a brother a son and a husband.

This picture was taken up in Northern Mozambique. Two beautiful elephant tusks they managed to save from poachers.
Benjamin on the right with the hat and the faithful Bell Jet Ranger he lost his life with. 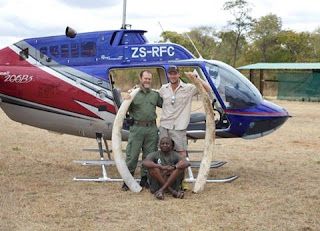 Posted by Travel African Borders at 11:42